Town Hall in the Franciscan Monastery

The former Franciscan Monastery in Seelbach was built from 1732 to 1735. A small brotherhood of Franciscans moved in upon completion.

The monastery was disbanded during the secularization in 1813. In the following years, the building underwent many renovations making it difficult to picture its original form.

After years as a factory, school and poor house, it has found its current purpose as town hall.

The roof structure of the former monastery church "St. Michael" is especially noteworthy because of its architecture: The beams are a hanging construction with their base on the outer walls. Two crosses on the roof point to the Christian past of the former Franciscan Monastery: one cross with two crossbeams – a so-called Damian cross, a Franciscan symbol –   and opposite that a simple iron cross.

If you are interested in a tour of the monastery please contact the Culture and Tourist Information Office. 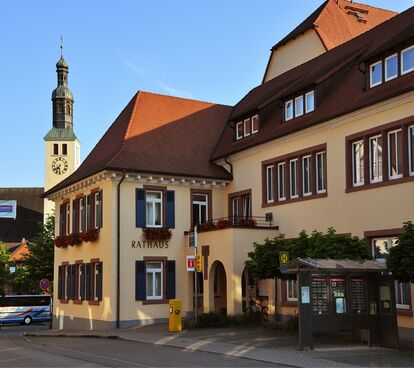